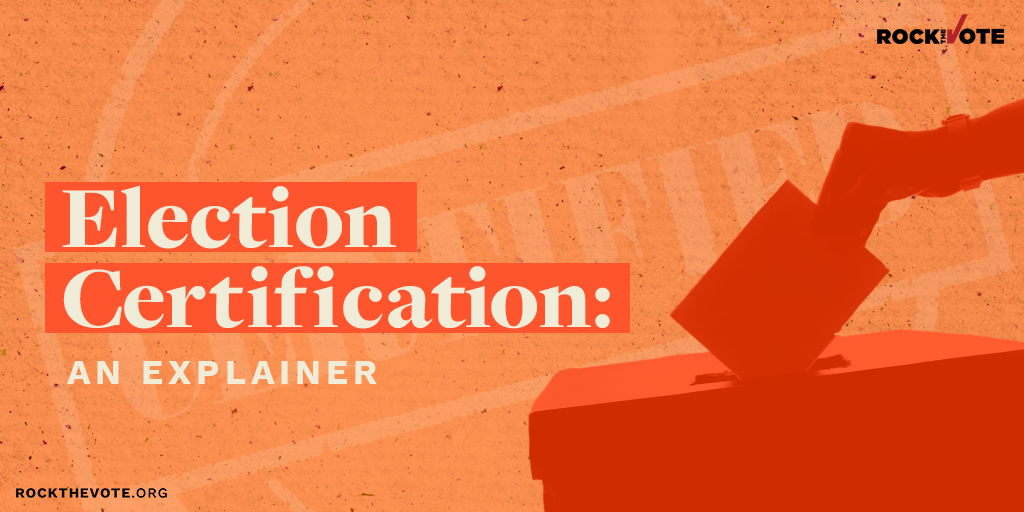 Is the outcome of an election decided on election night?

While there may be projections and unofficial results, the outcome of an election is not official until after a canvass of votes and a certification of the results. Even if a winner seems clear, a canvass of votes and election certification can take up to several weeks after Election Day. It is important that every ballot is counted fairly and accurately, which takes time and each state has its own processes and timeline for doing so.

What is a canvass of votes or election canvass?

A canvass of votes ensures an account of all ballots cast and that every valid vote is counted. This is when the election official can resolve discrepancies, correct errors, and take remedial actions to ensure completeness and accuracy before certifying the election results.

The canvass includes ballots cast via absentee, early voting, and on election day; provisional and challenged ballots; and ballots cast by uniformed and overseas citizens.

During this time, voters may be able to resolve their eligibility or cure their ballots if their state allows. Use Rock the Vote’s Ballot Tracking and Curing Tool to determine the status of your ballot and learn more about your state’s ballot curing procedures.

What does processing ballots mean?

Before absentee and vote-by-mail ballots can be counted, they need to be processed. Processing varies by state both in definition and in method. Generally processing includes verifying the voter’s identity or their signature, verifying a witness or notary signature (if required), and physically preparing ballots to be counted by unfolding and removing the ballot from the envelope(s).

What does counting ballots mean?

The counting phase is the actual tabulation of the ballots. Similar to “processing” the exact definition and method of counting differs by state (and sometimes by county). In fact, the state may use a term other than “counting” to refer to this phase and may include some of the processing steps mentioned above. The counting of absentee, mail-in and early vote ballots may occur before, during, or after Election Day and is determined by the state – and sometimes the county.

What does the certification of election results mean?

The certification of an election is the process by which election officials confirm the tabulation and canvassing of the ballots are complete and accurate and that the election results are true and accurate of all votes cast in a specific election.

To aggregate local results and certify the results at the state level, many states give authority to a state canvassing board or single official such as a Secretary of State, State Attorney General, or Lieutenant Governor. Once election results are certified by the authorized power in the state, the results will be considered official.

The timeline for certification varies by state ranging from one to thirty days after the election.

What can delay election projections or results?

It’s important election officials count every vote to ensure the will of the people decides our elections, not our elected officials.

Additionally, an increase in absentee, vote-by-mail, provisional and contested ballots as well as ballots cast by uniformed or overseas citizens may cause a delay. This is because processing these ballots and resolving eligibility takes time. That’s why it is best practice for states to start the processing of ballots before Election Day; however, some state legislatures have prevented election officials from processing ballots until Election Day or even after polls close in an attempt to delay results and create doubt in the electoral process. The later processing starts, the longer projections and results will take.

Finally, interference with the canvassing process, such as disruptive monitors, could cause delays as well as potential court decisions about contested ballots or procedures.

In most local, state, and midterm elections, yes.

In a presidential election, not quite.

What’s the election certification process for a presidential election?

All states need to certify election results, which makes it clear for whom the state’s electors are bound to vote. State’s must resolve all legal challenges and voting disputes by a safe harbor deadline for electors to be accepted by Congress.

A total of 538 electors gather in each state’s capitol to cast and mail votes to Congress on the same day, which is known as the National Electoral Vote.

The members and newly-elected members of Congress are sworn into office convening a new Congress on January 3rd at noon as dictated by the Constitution unless the preceding Congress chooses another day.

A joint session will open for Congress to count Electoral Votes. There is a process for objecting to electors. There is also a process if no candidate wins 270 votes.

The president-elect is inaugurated on January 20th at noon as determined by the Constitution.

Is there any role to play after Election Day?

First, Immediately make sure that your vote was verified and counted! Pay attention to your mail and email in case your local election official reaches out and use Rock the Vote’s Ballot Tracking and Curing Tool to verify your vote was received and counted. If there is a question about your ballot, use the tool to proactively reach out and resolve any issues.

If you voted using a provisional ballot, follow up with your election officials to resolve your eligibility to ensure your vote was counted. You can use Rock the Vote’s Election Official Look-Up Tool to find their contact information.

If you believe that your rights were violated, don’t hesitate to call or text 866-OUR-VOTE to reach the Election Protection Hotline. (888-VE-Y-VOTA for Spanish, 888-API-VOTE for Asian Languages, and 844-YALLA-US for Arabic). Your story helps voting rights organizations track, monitor, and address trouble areas and may be used in voting rights litigation.

If you live in a state where runoffs may occur, pay close attention to find out if you have a runoff election. Often in runoff elections, voter turnout drops off resulting in a small, unrepresentative group making decisions for the rest of the community. Sign up to receive election reminders from Rock the Vote to make sure you never miss an election.

If an election is close, there’s a chance it will result in a recount. In some cases, the election office or local groups may look for volunteers to be part of the recount effort. If you are invested in the outcome of an election, consider being a part of a recount effort should the need arise. Due to certification deadlines, recounts are organized very quickly and volunteers may be needed with little notice.

Support your election officials. Organize friends and family to make thank you cards, make a poster, or leave voicemail messages of gratitude (at least a few weeks after the election so as to not interfere with election canvassing and certification). Election officials have been targets of harassment and intimidation and are often doing a thankless job trying to administer our elections with underwhelming resources.