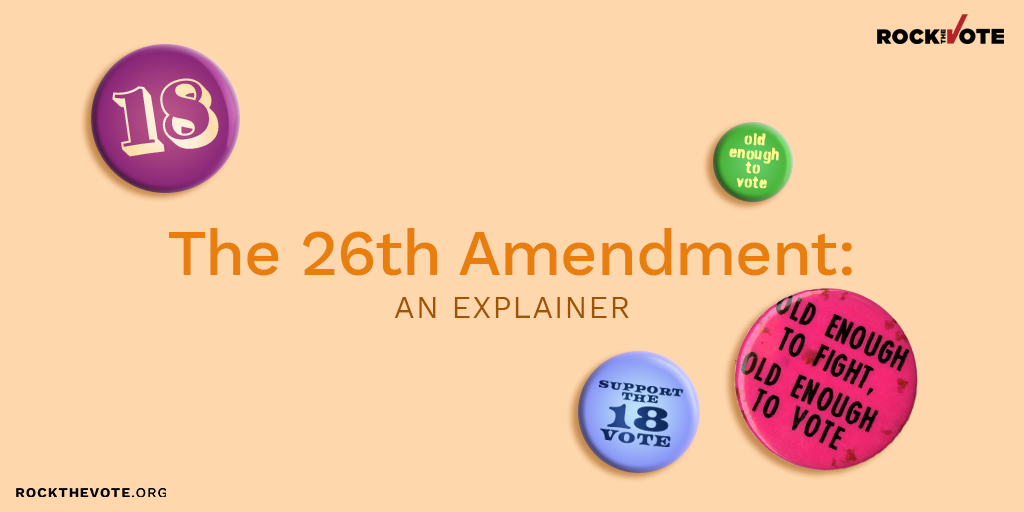 What is the 26th Amendment?

What led to the passage of the 26th Amendment?

In 1942, in the midst of World War II, Congress lowered the minimum age to be drafted into the U.S. Military to 18 from 21. This wartime change launched a decades-long debate over lowering the voting age in the United States, as young men were being drafted to fight for their country while simultaneously being denied the right to vote. From this discrepancy, the slogan “old enough to fight, old enough to vote” was born, and it became a rallying cry for a youth voting rights movement, which was powered by the activism of young people and their allies.

With no progress at the federal level, the youth voting rights movement did gain ground in some states, and in 1943 Georgia became the first state to lower the voting age to 18 in state and local elections. Granted, the state also implemented Jim Crow laws so only white youth could exercise their freedom to vote.

Over a decade later, the movement to lower the voting age gained momentum when President Dwight D. Eisenhower used his 1954 State of the Union address to call upon Congress to “propose to the States a constitutional amendment permitting citizens to vote when they reach the age of 18”. Widespread public support for lowering the voting age followed in the 1960s when the Vietnam War recentered the youth voting rights movement on its original “old enough to fight, old enough to vote ” slogan.

Five years after the Voting Rights Act of 1965, Congress voted to add an amendment to the law lowering the voting age to 18 in federal, state, and local elections nationwide. After being signed into law by President Richard Nixon, the states of Arizona, Idaho, Oregon, and Texas sued the federal government.

In Oregon v. Mitchell, the U.S. Supreme Court ruled in a 5–4 decision that Congress only had the power to set the minimum voting age in federal elections — not in state or local elections. The Court held that it was unconstitutional for Congress to lower the voting age in state and local elections, and thus that provision was struck down.

Following this defeat, proponents quickly took action to amend the U.S. Constitution to lower the voting age. The U.S. Senate voted unanimously to pass the proposed Constitutional amendment, followed by an overwhelming House vote in favor. In just over two months, the requisite three-quarters of state legislatures — or 38 states — ratified the 26th Amendment, and it officially went into effect on July 1, 1971.

How has the 26th Amendment impacted the youth vote?

Young voters are new voters and even though they are enthusiastic about participating, they face unique obstacles to voting that result in turnout that is historically 20 to 30 points below older voters in presidential elections. This discrepancy is even greater in midterms, state and local elections.

That is because, despite giving 18-year-olds the ability to vote, no systematic changes were made to prepare them to participate in our democracy as soon as they became eligible. A healthy democracy supports and promotes participation; however, not only do we not prepare young voters to participate, but the process is often designed to make it harder for them to vote with restrictive policies that specifically target young voters. As a result, our democracy continuously fails to represent youth, generation after generation. The youth generation is routinely a generation without representation.

Who is considered a young voter?

The definition of a young voter varies to some extent on the context in which the term is used given that there are characteristics and trends specific to this group. Typically, “youth” in the voting context means anyone ages 18 to 25. In some cases, the term may refer to those ages 18 to 29 or, in some cases, ages 18 to 34.

Have we seen any progress in participation among young voters?

Yes, five decades after the ratification of the 26th Amendment, the United States has experienced unprecedented levels of youth voter turnout in recent elections. In the 2018 midterm elections, young people turned out to vote at the highest midterm levels since the ratification of the 26th Amendment. And, youth voter turnout in 2020 reached “one of the highest youth participation rates in decades”.

Similarly, just as the passage of the 26th Amendment was led by a movement of youth activists, the recent youth vote is often pointed to as a result of increasing youth activism around a host of issues that disproportionately impact young people. In the leadup to the 2020 federal election, racism and police brutality dominated youth-led activism, and young people have also built powerful advocacy movements around issues including climate change and gun violence.

In a recent post-election survey, the Center for Information and Research on Civic Learning and Engagement (CIRCLE) found that “more than three-quarters of young people believe that they have the power and responsibility to change the country and that this work goes beyond elections”. Such a high level of youth political participation — which only begins with electoral politics — would not be possible without the important baseline of voting rights granted by the 26th Amendment.

Why is the youth vote particularly important right now?

The youth vote is currently composed of the youngest members of the Millennial Generation and the oldest members of Gen Z, two of the largest and diverse generations in our country’s history.

In 2024, Millennials and Gen Z together will make up 44% of eligible voters giving them enormous power to determine the outcome of elections. With 48% of Gen Z and 39% of Millennials identifying as minorities, these generations have markedly different priorities and values than older generations. This also means members of these generations are more likely to be targets of voter suppression efforts beyond being young voters.

Has the increase in youth participation had any consequences?

As young voters overcame challenges to break turnout records in 2018 and 2020, they have increasingly become the target of voter suppression efforts. From the rise of voter ID laws to intensified efforts to remove polling sites from college campuses, young people must navigate obstacles designed to keep them from making their voices heard.

Policies like strict voter ID laws are a more recent form of voter suppression that targets young voters and only started gaining traction around 2010. Limitations on who can vote early or by mail, voter suppression efforts seek to maintain the status quo by restricting who can participate in the electoral process.

In 2021 alone, more than 389 bills in 48 states — including high-profile bills in Florida, Georgia, Texas, and elsewhere — have been introduced at the state level to restrict Americans’ freedom to vote by putting up barriers to silence our voices based on what we look like or where we live. Bills in New Hampshire and Montana specifically target young people where they saw significant jumps in youth voter turnout.

As we celebrate this important anniversary of the expansion of voting rights to young people in America, we must continue to protect the rights of young voters as they face a new wave of barriers to casting their vote.

Is there Legislation to Protect Our Right to Vote and Promote Democracy?

Two critical pieces of federal legislation — the For the People Act and the John Lewis Voting Rights Advancement Act — would implement comprehensive reforms, including establishing national standards for registering and voting; reducing the power of big money and special interests in our democracy, and restoring the Voting Rights Act of 1965.

While these bills passed the U.S. House of Representatives and have been stalled in the Senate under the 117th U.S. Congress, these bills can be reintroduced at the federal level in future years and at the state level. In fact, New York state signed The John Lewis Voting Rights Advancement Act into law making it the first state to pass this piece of legislation and paving the way for others. This follows the strategy and trend of major pieces of federal legislation passing at the state level to gain traction and public support before passing at the federal level.

Are there practices and policies that help to increase youth participation?

Steps you can take to improve youth participation include:

The 26th Amendment has empowered decades of young Americans to speak loud and clear about what they want for our country. The stakes right now are high, but — just as it did with the ratification of the 26th Amendment — democracy will win.