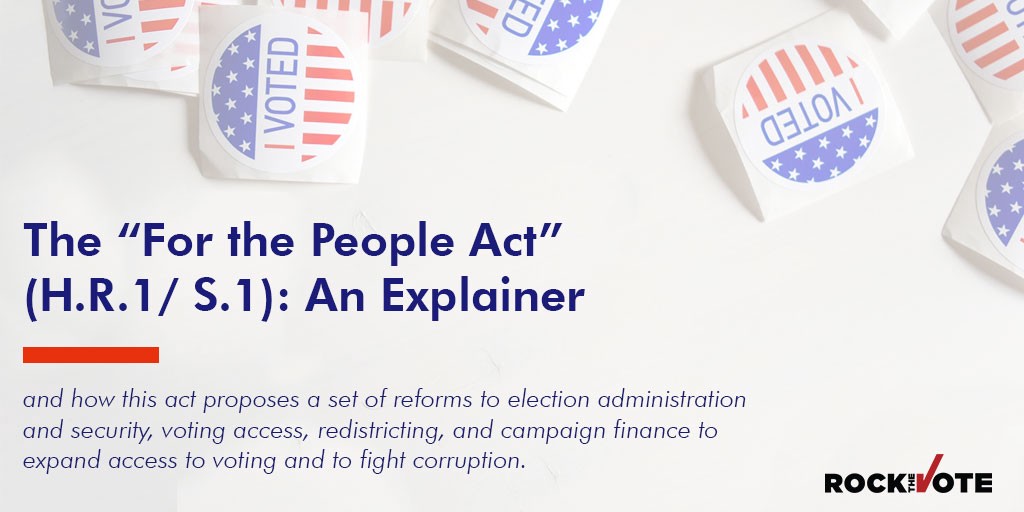 H.R. 1, the “For the People Act” proposes a sweeping set of reforms to election administration and security, voting access, redistricting, and campaign finance to expand Americans’ access to the ballot box and fight corruption. All of these reforms will ultimately improve the way our democracy works for everyone. Rock the Vote and many other voting rights advocacy organizations support the For the People Act as a major step toward a more fair, truer, and representative democracy.

Federal legislation on elections and voting rights has been critical to making our democracy more reflective of the people and their will. The Voting Rights Act of 1965 prohibited racial voter suppression; the Uniformed and Overseas Citizens Absentee Voting Act expanded voting access to American living overseas; the National Voter Registration Act (NVRA) of 1993 simplified and expanded voter registration; and the Help America Vote Act of 2002 established minimum standards for election administration nationwide. We have the right to register to vote at the DMV — the method that a majority of voters use to register — thanks to the National Voter Registration Act.

In a series of voting rights provisions, the For the People Act sets out to fight voter suppression and discriminatory policies that often keep voters from the polls. Specifically, the bill seeks to restore the historic Voting Rights Act of 1965; proposes new protections of Native American’s right to vote; improves election accessibility for people with disabilities; protects against voter intimidation; equips voters with new tools to seek justice when the validity of their votes are challenged in court; and guarantees the right to vote to people with past convictions reversing antiquated laws rooted in racism.

One in 44 adults cannot vote due to past felony convictions. Given systemic racial inequities and injustices in the U.S. criminal justice system, disenfranchisement disproportionately impacts Black and Latinx Americans. Over 6% of adult Black Americans have lost the right to vote due to past felony convictions. In some states, disenfranchisement prevents 20% or more of adult Black Americans from voting. The For the People Act would guarantee the right to vote for these citizens, 80% of whom have served their sentence and returned to their communities.

Each of these reforms, especially when paired with the election administration reforms would, as Duke Law Professor Guy-Uriel Charles said, “shift the burden of finding access to voting from the individual to the state.” The United States is one of the few democracies in the world that puts the burden on individual voters rather than on the governments that are supposed to represent and serve them.

The For the People Act presents reforms to establish a strong federal standard for election security, voter protection, and ballot access.

H.R. 1 / S. 1 also protects voters who have registered. The For the People Act offers protection against voter roll purges that have disenfranchised registered American voters. Voter rolls are the lists of registered voters that are maintained by state and local election officials. While it’s important to ensure voter rolls are cleaned, there are best practices for maintaining these lists. Since 2013, however, state and local officials have used the practice of cleaning voter roles as a way to purge marginalized voters from voter rolls. Between 2016 and 2018, more than 17 million voters were purged, cancelling their registrations.

The bill also mandates provisional ballot access; Election Day resource sharing between polling places to reduce lines; two weeks of early voting in every state; and no-excuse mail-in voting with the opportunity for voters to “cure” any minor issues on their ballot. Each of these reforms has proven successful in at least 20 states, and advocates of the bill argue that, bundled together, they would contribute to more equitable elections.

The bill includes provisions to ensure elections are safe and secure from hacks, fraud, or other threats. First, the bill requires states to begin counting early votes and mail-in votes before Election Day to streamline the processing and counting of ballots and election results.

Lastly, the For the People Act equips state and local election boards with the funding necessary for these election administration reforms.

The For the People Act addresses the problem of partisan and racially biased gerrymandering, which is the drawing of political maps in favor of one party. States undergo the redistricting process, the drawing of new political maps, every ten years based on population counts from the U.S. Census.

Each state has a different process for redistricting; however, most current redistricting processes enable legislators to manipulate maps in their favor, passing redistricting plans that entrench partisan rule and are often racially discriminatory. This practice deeply threatens the core tenets of American democracy: responsiveness, representation, and accountability.

The For the People Act would mandate states create politically balanced redistricting commissions whose members would be subjected to strict conflict of interest regulations. These commissions would meet every 10 years, following the results of the Census. Commission members would draft redistricting plans transparently, enabling public access to all data and allowing for public comment on drafted plans.

The bill lists specific and prioritized criteria for these commissions to follow when drawing districts, and requires all plans be subjected to measurements of partisan and racial impact studies before they can be approved. Lastly, the plan offers clear and fast-tracked avenues for remedying and redrawing unfair and gerrymandered districts in the federal court system.

The For the People Act takes aim at the undue influence of wealthy donors in American politics.

The bill also seeks to increase the relative impact of small donors through a campaign public financing system that matches donations up to specific limits. Lastly, the For the People Act would reorganize the Federal Election Commission (FEC) and empower it to more effectively investigate campaign finance issues and enforce relevant sanctions.

Then, H.R. 1 will be considered by the Senate as S. 1. Because of the Senate Filibuster, 60 Senators would have to vote to end debate on the bill and bring the For the People Act to a vote. This is what’s called cloture. The bill would then need a simple majority to pass before being sent to President Biden’s desk for final signature.

The Filibuster will make it very challenging for S. 1 to come to a vote on the Senate floor, since it enables a small group of Senators to block a vote, even if the bill would ultimately pass. That’s why we need your help moving this essential legislation forward. Contact your Senators now and make sure they know this legislation is important to you.

How You Can Support The For the People Act!

Rock the Vote strongly supports H.R. 1. America is long overdue for election and voting reform, and this bill takes a major step toward strengthening our democracy.

Still, the For the People Act will only pass if our Representatives and Senators know that we, the people, support it. To take action in support of H.R. 1 / S.1, you can call, email, or write letters to your Members of Congress. You can find your elected officials’ contact information here.

The Stanford Center on Philanthropy and Civil Society hosted four seminars on the bill, which helped inform this explainer. You can view them all here.