The March on Washington 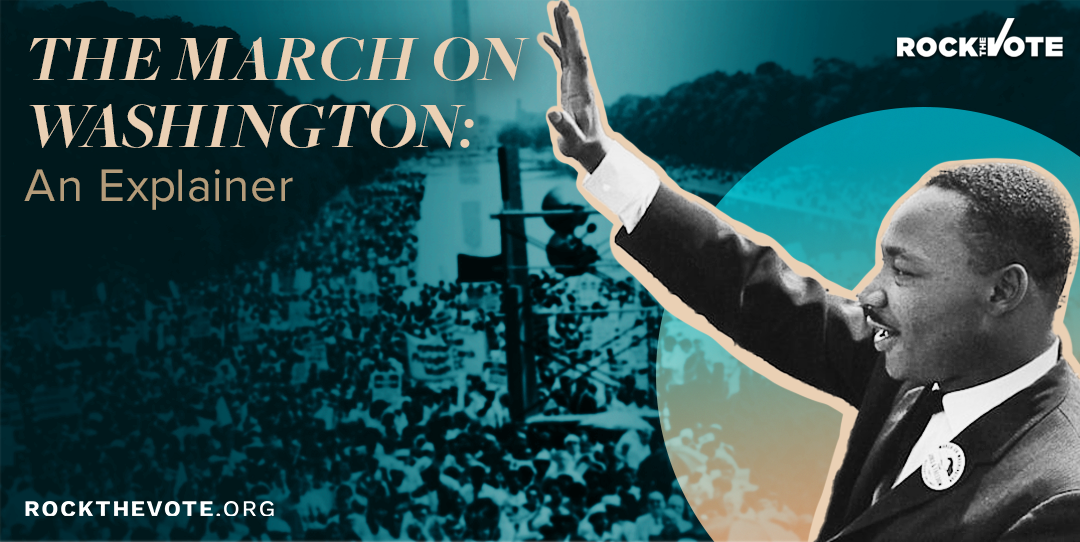 On August 28th, Rock the Vote will celebrate the anniversary of the March on Washington

What was the March on Washington?

On August 28th, 1963, leaders of the civil rights movement organized the March on Washington to protest the ongoing inequalities experienced by Black Americans. Dr. Martin Luther King Jr. delivered his famous “I Have a Dream” speech from the steps of the Lincoln Memorial on the National Mall in D.C. in front of the nearly 250,000 people who gathered for the march.

Organized by A. Philip Randolph — an American labor unionist and civil rights activist, and Bayard Rustin — a fellow civil rights organizer, the March was one of the largest political rallies for human rights in United States History.

A group of ten speakers addressed the crowd from the steps of the Lincoln Memorial, including Dr. King, NAACP President Roy Wilkins, and the late U.S. Congressman John Lewis, the then chairman of the Student Nonviolent Coordinating Committee (SNCC). The speakers called for federal civil rights legislation to include public accommodations, integrated education, housing, and the freedom to vote.

What led to the March on Washington?

Plans for the March on Washington began years before marchers actually gathered on the steps of the Lincoln Memorial, and several smaller, local marches preceded the flagship March in 1963.

In 1941, Randolph planned a mass march on Washington to protest Black soldier’s exclusion from World War II defense jobs and New Deal programs. However, a day before the event, President Franklin D. Roosevelt met with Randolph and agreed to issue an executive order forbidding discrimination against Black workers in defense industries and government jobs.

The executive order also established the Fair Employment Practice Committee (FEPC) to investigate charges of racial discrimination. As a result, Randolph called off the planned march; however, Congress soon cut off funding to the FEPC in the mid-1940s leading to its ending in 1946. As a result, frustration over jobs and economic opportunity in the African American community persisted, in addition to the overwhelming racial caste system that relegated Black citizens as second class in housing, jobs, education, and more.

In May 1957, Randolph helped organize a mass march on Washington, where nearly 25,000 demonstrators gathered at the Lincoln Memorial to commemorate the third anniversary of the Brown v. Board of Education (1954) ruling, which held that segregation in schools was unconstitutional, as well as to urge the federal government to meaningfully uphold its decision to desegregate schools.

Fast forward to 1963 following violent attacks on civil rights demonstrators in Selma and Birmingham, Alabama, organizers began to plan another mass protest in the nation’s capital. Randolph and civil rights activist Bayard Rustin joined forces with Dr. King and the Southern Christian Leadership Conference (SCLC) to plan a march that would demand fair treatment and equal opportunity for Black Americans. The March would also call for passage of the Civil Rights Act, which was being stalled in Congress by southern congressmen.

Despite figures like President John F. Kennedy voicing fears that the event would culminate in violence, Randolph and King insisted that the march move forward. Indeed, King told the president, “Frankly, I have never engaged in any direct-action movement which did not seem ill-timed.”

How did the March on Washington impact the Civil Rights Movement?

The March on Washington is considered by many to be a major turning point in the fight for civil and voting rights for Black Americans.

Following the event, the speakers travelled to the White House for a discussion of proposed civil rights legislation with President Kennedy and Vice President Lyndon B. Johnson. Media attention also provided the March on Washington with national exposure, which enabled people from all backgrounds to engage in the discourse of civil rights for Black Americans.

Moreover, the powerful symbolism of the March — particularly King’s “I Have a Dream” speech calling for an end to racism in the U.S. — increased popular support for the Civil Rights Movement. In his speech, King invoked pivotal documents in American history, such as the Emancipation Proclamation and the Declaration of Independence, to articulate his dream of achieving freedom and equality in a country still plagued by the legacy of slavery. King’s speech and the March as a whole placed pressure on the Kennedy administration to advance civil rights legislation in Congress.

In this way, the joint impact of the March on Washington on legislators and members of the public laid the foundation for the passage of the Civil Rights Act of 1964 and later the Voting Rights Act of 1965. These pieces of legislation were turning points in the struggle for civil rights, outlawing segregated public facilities and prohibiting discriminatory practices in employment and voting, and so much more.

Why does the March on Washington matter today?

The March on Washington helped amplify and create a new national understanding of the problems of racial and economic injustice that with other acts of protest and civil disobedience paved the way for progress through legislation. The March still serves as a model for bringing individuals from across the country together to share their individual experiences of labor discrimination and police brutality to proclaim a larger collective story of racial injustice.

As a result, it became difficult for legislators to deem issues pertaining to racism as an exclusively Southern problem, but rather a national one. By emphasizing the mass participation of organized labor, students, religious leaders, and other workers, the March exemplified how to use collective action in the fight for racial equality and civil rights.

Given today’s assault on voting rights, particularly targeting young people and people of color, the March and King’s famous speech remain poignant. Many of the frustrations and dreams that King expressed in his “I Have a Dream” speech still ring true:

“I am not unmindful that some of you have come here out of great trials and tribulations. Some of you have come fresh from narrow jail cells. Some of you have come from areas where your quest for freedom left you battered by the storms of persecution and staggered by the winds of police brutality… So even though we face the difficulties of today and tomorrow, I still have a dream. It is a dream deeply rooted in the American dream. I have a dream that one day this nation will rise up and live out the true meaning of its creed: We hold these truths to be self-evident, that all men are created equal.”

Reflecting on the March on Washington reminds us that while progress has been made, much work remains to secure equal voting, housing, education, and other civil rights for all people in this country. In the words of Angela Davis, “Freedom is a Constant Struggle.”

How can you celebrate the legacy of the March on Washington?

In the past, people have participated in anniversary marches organized by civil rights organizations. On Saturday, August 28, 2021 there will be a March On Washington for Voting Rights. This demonstration will honor the 1963 March by amplifying the recent attacks on our democracy and mobilizing Americans to demand that elected officials stop hijacking democracy, denounce voter suppression and ensure fair, easy access to the vote for all.

One of the most powerful acts we can take to carry on the legacy of the March and the vision of America laid out in King’s speech is to urge our senators to pass the John Lewis Voting Rights Advancement Act, as well as the Freedom to Vote Act. For more information on steps you can take to advance civil rights, specifically the protection of voting rights in the U.S., explore Rock the Vote’s Freedom to Vote campaign, where you can easily call, email, and tweet your elected officials.